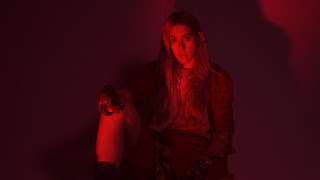 When I first saw that TORRES was doing a small tour of living room shows, I was shocked since in our universe Mackenzie Scott is a megastar that is far too big to be playing in peoples' living rooms. That was quickly replaced by disappointment since the evening she would be playing in Allston wasn't going to work for me. At the very last minute my plans changed and a couple of tickets opened up, so I ended up getting in.

I had assumed that TORRES' performance would be an acoustic one, playing a laid back set of stripped down renditions of her songs. I was wrong. TORRES played an electric guitar plugged into an amp. Sure, it was stripped down since there weren't other instruments, but it was a much more rockin' show (and louder) than I expected. Obviously no complaints here.

As with any living room show, Thursday night was an intensely intimate show. It was a mixture of the audience being quiet, reserved, and respectful of being at such a unique and special show, and other members being conversational with Scott throughout the night. Both were completely acceptable and welcomed. When you're one of maybe two dozen people watching a performer, there is a personal connection no matter which style of audience member you are.

TORRES played from a loose setlist, jumping around her entire career. She played the bigger and more well known songs like "Sprinter," "Thirstier," and "Don't Go Puttin Wishes in My Head," but also played songs I don't recall ever hearing before. Only one audience request wasn't played, but only because TORRES was unsure how to play the song with just her guitar. An ongoing theme of the night was TORRES worrying she was playing enough songs the audience wanted, when the two dozen or so in attendance were just so happy to be there that she could have played anything she wanted and we would have been thrilled.

Mackenzie Scott combined a nervousness in playing such a small, intimate show with being quite open and chatty between songs. She ended up playing well past the scheduled end time, and repeatedly asked if we minded. I can guarantee no one minded at all. We all got more than we expected, a story about a missing wedding ring, and memories of one of the most special performances we'll ever see.