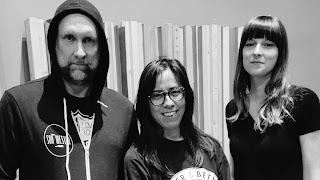 Built to Spill are one of those bands I've been going to see for around twenty five years now in their various incarnations. I've seen them play in various size venues, but I think my favorite was a 1998 CMJ show at the Bowery Ballroom. Despite knowing Doug Martsch and company probably won't quite hit that level for me again personally, I try to get out every few years or so to check them out.

This was the first time I got to see Built to Spill's current line up, and possibly the first time I've seen them as a trio. (If I have before, it's been a long, long, long time...) Interestingly, the band set up in a straight line in the front of the stage with bass player Melanie Radford and drummer Teresa Esguerra on either side of Martsch. I was right in front of Esguerra's drum set, so I had the unique experience of paying more attention to the drums than guitar during a Built to Spill show. Esguerra is a fantastic drummer, adding flourishes and helping rework old favorites slightly. Radford reminded me of Matt Patton of Drive-By Truckers. This wasn't because of a similar playing style, but because both have the happiest grins on their faces when they're playing bass.

Built to Spill opened with a version of "Stop the Show" that was reworked just enough to keep the twenty five year old song fresh. With a new album due in a few weeks, I had assumed a lot of the setlist would be focused on unreleased material, but it was spread out over Built to Spill's entire career. The new songs more than held their own with classics like "Center of the Universe" and "Big Dipper," so expect those to become long term favorites very soon. "Bloody Rainbow" from their Daniel Johnston tribute album was played along with a cover of Richard Hell's "Time." Closing out the main set was "Randy Described Eternity" and that was followed up with an encore of "Virginia Reel Around the Fountain," and I can't imagine two better songs to end the set. Was this as good of a show as the Bowery Ballroom show from the previous century? I don't think so, but that could also just be my own nostalgia holding it back.

Melanie Radford did double duty opening the show with her other band Blood Lemon. Another alt-rock trio from Boise, Blood Lemon had an indie rock goes rock and roll sound that sounded like a combination of Veruca Salt, The Donnas, and... well... Built to Spill. They played with a confidence you don't normally see in a band opening a show for an established headliner while people are still filing in, but with good reason. They're the kind of band that's going to win over the entire crowd by the end of their set, and they handily did so.

Wetface is a novelty artist playing a large Yamaha keyboard from the 1980's. It didn't work me for personally, but the younger people in attendance seemed enamored with him.