Already Dead - "My Collar is Blue" 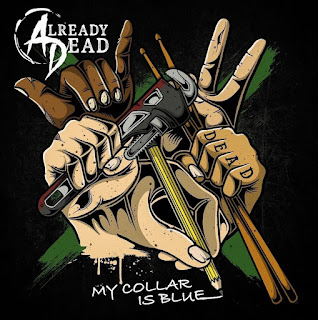 Boston has a great history of blue collar punk, and the latest is Already Dead. The Stoughton based band has a new single out called "My Collar is Blue." This new song might go a little more pop punk than what you may typically consider working class Boston punk, but there is still a lot more edge here than you would typically find in a pop punk song. I suppose this would be the definition of melodic punk. Already Dead inject just the tiniest bit of a Celtic sound on this new one, and maybe just the slightest hint of a country twang. There is still some killer gang vocals an choruses on "My Collar is Blue," so even punk purists won't be able to avoid singing along.

“‘My Collar is Blue’ is about working class men and women who dedicate their lives to being just that. Also, the notion that while it may seem like other more ‘elite’ classes control whichever city they are in, it’s the working class who directly affect the growth, advancement, and even the daily function of that city. It is an ode to the past, present, and future of the working class.”