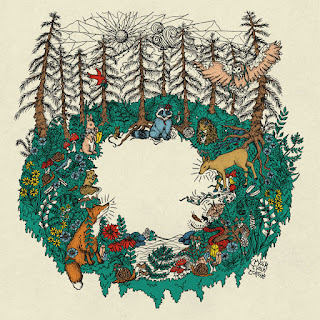 We've been waiting to bring you the new album from Tysk Tysk Task for quite a while now. My fandom is well documented here at If It's Too Loud..., so I'll try not to gush too much, but You're Sorry More is one of my favorite albums of the year. The Lowell band have crafted a masterpiece with this one.

You're Sorry More is just a primal release of aggression. It's one of those works of art that repels you as much as it sucks you in. Album opener "Rosegold" is a perfect example of this. It's filled with crushing guitars as Samantha Hartsel's vocals go from mesmerizing and lovely to a near primal scream throughout the song. "Pounding Sand" follows and brings more catharsis with it. Hartsel's vocalizations are over this intensely groovy and psychedelic backdrop of sound. A song like "Contagion" almost lulls you into a false sense of security as it plods along before it erupts into a narrowly controlled burst of chaos, barely held together by Danni Gannon's drumming.

My personal favorite moment on the album is the double shot of "Working On It" and "Working It Out." The pair of songs truly sounds as if it were one song as they blend together. "Working On It" is this quiet almost meditative reflection that sounds like trying to exorcise negative thoughts and retain some sense of calm... and not exactly succeeding. And then "Working It Out" comes crashing in. It's this White Stripes meets metal sound filtered through Tysk Tysk Task's woodland grunge sound. Everything about this pairing of songs is so raw, from the vocals to the playing style to production. It's not an easy listen at times, but goddamn is it a good one.

Even a song that seems like filler at first ended up being a favorite. "Forest Down" starts off with a minute of crickets, so it's easy to dismiss as just a way to emotionally come down after "Working On It" and "Working It Out." From there the song goes into some spoken word by Ellis Roundy (producer of You're Sorry More and guitarist/vocalist of The PA's) which is then followed by an almost painfully quiet ukulele/vocals turn by Hartsel. Somehow the song progresses from that to a near straight up punk song, albeit with swirling psychedelia. It starts off as a throwaway song and turns into one of the most vital on the album.

The album ends with another perfect pairing of songs. "Flies" is this foreboding song about being afraid to take out your trash during the pandemic that builds and builds in menace and paranoia until it finally explodes into a grunge epic of guitar that somehow crunches as it swirls into crashing drums. And just when you think you're safe, it comes barging back at you. "On My Own" closes out the album in this quiet, contemplative way. It's a sadly hypnotic song that encompasses the mood and catharsis of the album. Hartsel's vocals are painful to listen to on this one. She truly channels every emotion into her art, and "On My Own" is a next level example of that. It's also an oddly hopeful song and not just gloom.

You're Sorry More is a journey of an album that is going to connect hard to some of us, and for those of us it does connect with, this is going to become a longtime favorite. Give yourself a solid undistracted hour to take this one in.

You can get a copy of You're Sorry Now via Bandcamp. For more on Tysk Tysk Task, check out the band on Facebook and Instagram.