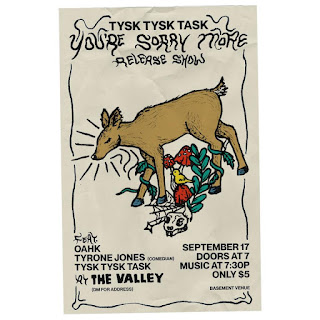 I can't say I'm a fan of basement shows. I like the DIY feel enough, but basement shows are usually a young crowd. Considering The Valley is in the UMASS Lowell neighborhood, it was going to be a very young crowd, and it was. (Pretty sure I was at least ten years older than the second oldest people there, and that's only counting the bands.) But when it's Tysk Tysk Task's album release show, I knew I needed to be the grandpa in the room and be there.

Oahk came down from central New Hampshire to open the show. Oahk is Bryan Ziolkowski playing guitar and vocals with samples. It's a very drone heavy and noisy affair, but there is such beauty in it. I liked Oahk's album Husks when it was released back in July, but I loved the live performance. The music moved between simple beauty and just a wall of drone and samples without ever losing any of the beauty no matter how brutal the song may have sounded. This is an artist we'll be keeping a close eye on here in the future.

Burp came on next, and I believe this is the third time I've seen the Lowell band play with Tysk Tysk Task this year. No other band makes me feel as old as these guys while I'm still enjoying the music. They opened with their hit song "My Back Hurts" by announcing it was about their balls. Yes, I'm way too old for this, but it's just dumb fun. As always, they reminded me of early, obnoxious Blink-182 (and I mean that as a compliment) with some noise/art-rock influences. They busted out their crowd pleasing and moshpit inducing cover of Britney Spears' "Toxic," and also played a second cover, which may have been Katy Perry's "The One That Got Away" is my Googling was correct. I'm sure I'll be the old uncle type guy standing over on the side at another one of their shows soon enough.

Tysk Tysk Task closed out the night with a mesmerizing performance. I've seen them an embarrassing amount of times since April of this year, but Saturday night's show in Lowell was just next level. Playing as a three piece with Ellis Roundy of The PA's (and producer of You're Sorry More) on bass, the band played their just released album track by track. As someone lucky enough to have received an advanced copy, Tysk Tysk Task brought their album to life in such unexpected ways. Partly because the band had made the little basement their own with strings of lights, fake vines, and Bambi projected behind them, this was a band truly coming into their own. Samantha Hartsel and Danni Gannon played with a joy I haven't seen from the duo before. The double shot of "Working On It" and "Working It Out" is always my favorite, but "Flies" was the song of the night. I dare you to find three songs so intense with aggression yet so stunningly beautiful. When they closed with an emotional version of "On My Own," the basement got quite dusty for just about everyone in attendance.