Earl Lett Quartet - "Do the Thing" 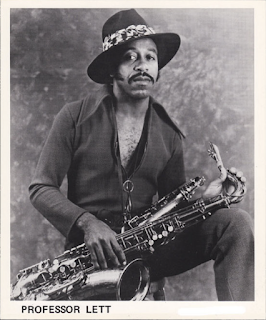 I'm (fairly) knowledgeable about the Boston rock and punk scene, but the 1960's soul scene is something I'm not familiar with at all. Luckily Eli "Paperboy" Reed has curated an upcoming album showcasing releases from Boston record store owner and label owner Skippy White. One of the songs that has been unearthed is Earl Lett Quartet's "Do the Thing." This is just pure, classic 1960's soul. It may not be one of the classics put out by Motown, but if you love forgotten nuggets and/or the Boston music scene, you need to check this out.

Eli "Paperboy" Reed says of Earl Lett and "Do the Thing":

“Earl Lett was a journeyman saxophonist and singer originally from Alabama. He posted up in Boston in the mid-60s with a residency at The Mad Russian featuring different vocalists including Billy Thompson and the legendary Lotsa Poppa. Boston clearly made an impression on Earl since he later named his own label Beantown, but prior to that he recorded this tough slice of proto funk for Skippy White as only his second record. According to Skippy, the nebulous quality of the 'thing’ in this song got it banned from radio!”

You can listen to "Do the Thing" below. The Skippy White Story: Boston Soul 1961-1967 is due out October 28 on Yep Roc Records. The album can be pre-ordered through Bandcamp.