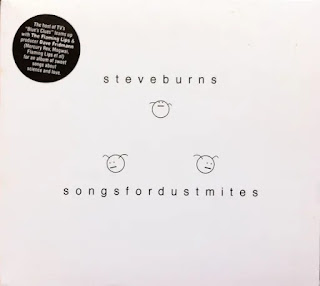 Steve Burns, mostly of Blue's Clues fame (a show, by the way, that Ken and I are both far too old to remember yet too young to have kids who remember Burns on it), pushed all the wholesome nostalgia buttons this week in a viral video directed at his childhood fans that grew up. There have been three humans sitting in the Thinking Chair over the years, and an effort to cash in on streaming subscriptions, all of them hung out together in a special.

Steve Burns is not Blue's Clues for me anymore. Burns is instead an indie rocker who put out an amazing album 20 years ago that not nearly enough people heard, Songs for Dustmites. So the story goes, Burns was in some bands in high school and college, and his demos somehow ended up with members of the Flaming Lips, who helped craft them into the loud, crunchy, poppy songs those of us lucky enough to discover it would come to love. "Mighty Little Man," "Troposphere," "What I Do On a Saturday"... all of these are songs that never leave my brain, and they hold up in the long term.

I still hope Steve Burns puts out some new stuff, or at least gets his old stuff on the streaming services. For now, unless you can find the physical copy anywhere, it's frustratingly out of print and you're ultimately stuck with whatever gets uploaded on YouTube.