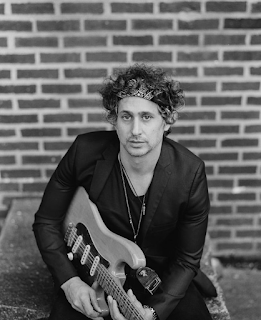 Lorne Behrman (The Dimestore Haloes, L.E.S. Stitches, The Sweet Things) has a new song about a difficult subject matter. "Sandcastles" is a slow rocker with Behrman speak-singing like a punk rock Tom Petty. In fact, all of "Sandcastles" sounds like if Tom Petty fronted the NYC Heartbreakers instead of his own ones.

"When I was a little kid, I took karate classes, and there was an instructor there who promised they would give me a kit to build sandcastles if I went with them into the bathroom. This began a very stressful and painful time for me. It was sexual abuse, mind games, and secrets. I was a really sensitive kid—I still am really sensitive—and I felt in over my head, but scared to tell anyone. I remember thinking I wish my soul could disappear into the calf of my leg—like I felt like I had to be at karate, but I wished I didn’t have to be present. I have the best parents—open, loving, and there for me, always—but I had too much fear and shame to tell anyone. I felt like I deserved this, so I just dealt with it, and eventually moved on from karate class, though I would experience more predatorial people and have more painful experiences until I addressed this and really got help.

"I would always bring this stuff up when I was drinking, and share with anyone around, but I couldn’t talk about it with people in the daylight. It was always there, hindering my trust, my connection with others, intimacy, body images, feeling safe, and even feeling safe alone—as if I was going to attack myself. It was the nightmare roommate in my head I never wanted.

"I eventually got help, and spoke to many people about this. I got a lot of comfort. One person told me to pray for the person who did this to me. I wanted to punch this guy in the face. I remember walking home that night and just being livid—they don’t understand, I thought. But it dawned on me, that the person who did that to me, probably had that done to them. All forms of abuse are passed on until you stop them. Not long after, I wrote the song.

"As far as a catharsis, I’ve heard people say if you shine a light on darkness it goes away. So, this is me, putting that saying into real life. Singing this in the studio was very hard for me, but my producer Matt Chiaravalle made me feel comfortable. Leaving that vocal booth and finishing the vocals of the song, I felt lighter—like a left a part of my history behind. Hearing it mixed and mastered, and knowing it will be out there scares me. I feel naked and vulnerable. That said, when I listen to the song, I feel like I am speaking up for that little kid that endured that private hell."

You can watch the video for "Sandcastles" below. When I Hit the Floor is due out October 15 on Spaghetty Town Records. For more on Lorne Behrman, check out the artist's website.