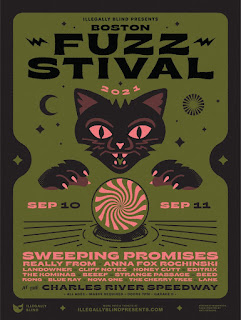 Fuzzstival is one of those festivals I've been meaning to get to for years now, but it just has never worked out for me. In its eighth year, it moved to a new location and with the promise of NOVA ONE and Cliff Notez playing on Saturday night, I was finally going to be able to go. The new venue was amazing. Charles River Speedway is a multi-use property on the grounds of a former bicycle racetrack. The event was held in Garage B, a concrete and metal garage with six or so open garage doors along the side of the venue, keeping the inside nice and cool and well vented. The sound engineers deserve a medal for keeping such a show sounding this well. The stage was the widest I've ever seen at a smaller venue, allowing ample room for one band to set up on one set while another band played on the other. Every band had thirty minutes to play, giving the entire show an early Warped Tour feel, except a lo-fi ultra-indie version of the Warped Tour. Eight bands played Saturday night, but I'm going to cover just my favorite performances.

Despite discovering NOVA ONE almost four years ago when they opened for Deer Tick and the fact that they're a Providence based band, I hadn't seen them since the Deer Tick show. The band played as a duo on Saturday with a sole guitarist accompanying Roz Raskin. As stripped down and mellow as their 2020 album lovable is, as a duo the songs are even more so. They took the Fuzzstival name quite literally and included heavy guitar effects, giving their music an otherworldy aquatic feel. Mixing that sound with Raskin's doo-wop meets indie folk vocals was completely enchanting and spellbinding.

I don't know if you could have found a band more the opposite of NOVA ONE to follow them than SEED. According to their Bandcamp profile, SEED is "Anti-fascist, Queer Forward, Boston Based, Experimental Doom." As amazing as the rest of the band was, vocalist Lex Lucidi was truly the star of their thirty minutes. Choosing to perform on the floor instead of the stage, Lucidi commanded the attention of the entire audience as they paced the floor. You had to remind yourself to actually look at the stage every so often, but you couldn't for very long. Ellsworth's vocals were absolutely stunning, whether they were sung in a vocal style more traditional than you normally get in metal/doom/sludge, or just plain out screamed. I'm not normally a metal guy, but SEED are an absolute must listen.

Honey Cutt were my favorite discovery from Saturday night. Their Bandcamp prfile describes them as "Dreamy Indie Rock with Surf Sensibilities." If you've been reading If It's Too Loud... for a while, you know that's a sweet spot for me. Honey Cutt filled their set with these gloriously fuzzy and bouncy indie rock songs bordering closely on pop. It's just jangly guitar pop, and sometimes that's all you really need. It's been a while since I've been to a festival and come home with a New(est) Favorite Band, but Honey Cutt are definitely one now!

Cliff Notez set shouldn't have been good, and maybe it wasn't. He had driven in all the way from Mass MOCA in North Adams for the show, and forgotten a cable he needed. He ended up having to do his set with just a laptop to play his music, which is my very least favorite kind of live hip hop. This caused the music to have a muted sound and feel. It's just weird to have music sound like it's just in the background at a live show. Plus, he was trying out mostly new songs, so audience participation was limited. But Cliff Notez is such a charming and compelling performer that he was able to overcome issues that should have completely derailed him. I went from being disappointed and about to head towards the back for a drink to entirely compelled to do my awkward middle aged dad dancing towards the front of the stage. I can't even imagine what his live show is normally like.

Sweeping Promises' blend of DIY dance friendly post punk was perfect to close out the evening. Unfortunately there was an incident that I didn't completely see so for legal reasons I won't comment on, but it left one audience member unconscious on the floor in front of the stage. This happened two songs into their set, and caused a long delay while he was attended to. I can't imagine what stopping a set for such a scary incident would do to the psyche of a band, but Sweeping Promises came back and did it expertly. Hinger for a Way Out is an amazing album, and is the type that is just begging to be heard live with an excited crowd. And it was. Despite the scary moments at the start of their show, the band won the crowd back into a frenzy of bopping along and dancing.