Live Shows: Pete Bernhard and The Huntress and Holder of Hands, The Word Barn, Exeter, NH 9/25/21 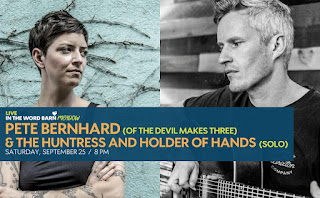 Saturday was a ridiculous day filled with live shows in the Boston area. No matter what I chose, I was going to have some level of FOMO. But, I've been hoping to get back to The Word Barn before they close up their meadow stage for the season, and with a dual bill of Pete Bernhard of The Devil Makes Three and The Huntress and Holder of Hands playing solo, I truly couldn't pass that up.

During the show, MorganEve Swain mentioned that she hates playing solo since it was all her and any mistakes couldn't be covered up. I was personally curious how The Huntress and Holder of Hands songs would work solo seeing that her music is quite noisy. Sure, it's primarily folk but with elements of indie rock and even metal it can get quite loud and discordant. Stripped down to just guitar and vocals her music was at its most bare bones. Swain played a good amount of new songs that were just being played live for the first few times, including last year's "Doctrine." If their solo form is this intriguing, I'm looking forward to see how they morph into album tracks. She also pulled out a cover of her late husband's (Dave Lamb) and a version of Alice in Chains' "Nutshell" that was mesmerizing. She closed with Brown Bird's "Bilgewater" to end a stellar solo set.

Pete Bernhard started his set almost immediately after Swain's ended due to the threats of rain that plagued the night. (Hoping that this show would be able to held outdoors led to constantly checking the weather all week and even all day, which was a rollercoaster.) He joked about trying to quit smoking and how he'd be angry is he died from something else right after quitting, and recommended not releasing an album during a pandemic. Obviously his solo sets are going to be a lot less raucous than a The Devil Makes Three show, but it was no less fun. He played the first half of his set truly solo and was joined by Swain on fiddle for the second half. The pair are playing a handful of smaller New England venues as a semi-tour, and you could just tell how happy they are to be playing live music again. I've coincidentally been on a Devil Makes Three kick lately, so seeing Bernhard playing solo in one of my favorite venues was serendipity.

The magic of The Word Barn's meadow was in full display Saturday night. I don't know why outdoor concerts in New England have been sequestered to the summer for so long. With a slight chill to the air, a fire, cider donuts, and the leaves just starting to change color, late September is quite literally perfect. The sound of crickets (or frogs?) accompanying the music was lovely. Plus, MorganEve Swain's dog Zed joined in at some points, which was impossibly charming.