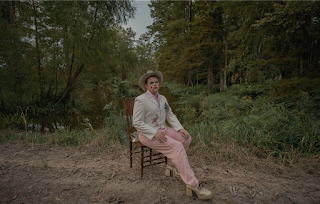 Ben Usie has had a unique path through music. He lived in DC for almost ten years playing with bands like Pree and Br'er. He started playing solo as Bruisey Pete with an entire stage of sequencers and synthesizers. After relocating to New Orleans, Usie ditched the stage of equipment since it was tough to lug around to bars for shows, and began performing solo guitar shows. Eventually Bruisey Peet picked up three additional members, but they dropped off since playing small shows at 2:00 am become too much for them. This time, Usie came back as a solo piano performer before picking up Lost Bayou Ramblers' Bryan Webre on upright bass.

"Poached Eggs" is the latest song from the current iteration of Bruisey Peets. The style has been dubbed "queer swamp pop," and is an odd little sound that's a little cabaret over a lot of a pop sound. It reminds me of the quieter side of Ben Folds Five with a much darker sense of humor. The song has a light, playful feel that doesn't quite mask an anger that leaks out. "Poached Eggs" very slowly builds into a more chaotic ending that shows off Usie's noisy musical past while still keeping the same structure the song is built on. There's a lot to like here.

"'Poached Eggs' was written as a poem after a kitchen shift with my brother, Ethan Brasseaux.  I was trying to remind him how special he is as we sweat over making gluten-free bread and buckets of kimchi, and maybe I was really speaking to myself.  There’s a sad clown sincerity that rings triumphant over the absurdity of this consumerist world."

You can listen to "Poached Eggs" below. The album Poached Eggs is due out November 19 on Y'allstar Records (which is my new favorite record label name). You can pre-order the album here. For more on Bruisey Peets, check out the artist's Facebook.