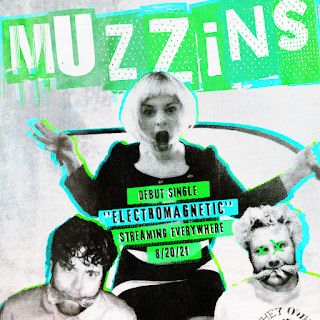 Boston's Muzzins have one of the most unique sounds you're going to hear this year. Fronted by TV chef and dominatrix Rayna Jhaveri (yeah, you read that right...) the band have released the whiplash inducing new single "Electromagnetic." The song starts off like a typical alt-rock song, but within seconds slams into more of an electronic/funk/hip hop hybrid. Throughout its three and a half minute run time, the song cycles through these genres as well as punk and jazz. It sounds like a mash up track, except by the same artist. Somehow, as fast and frantically as "Electromagnetic" changes tempos and genres, it all slows well into the same cohesive composition.

You can listen to "Electromagnetic" below. The song is available as a single via Light of Day Records. For more on Muzzins, check out the band's Facebook. They're also playing a show at the Midway Cafe in Jamaica Plain September 11. You can get tickets for that show here.