Live Shows: Juliana Hatfield and Stars Like Ours, ONCE at Boynton Yards, Somerville, MA 9/19/21 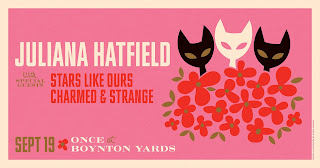 I've obviously been a Juliana Hatfield fan for decades at this point, but have seen her live only a handful of times. Seeing her at ONCE back in February of 2020 was one of my last shows in the before times. I saw that she was playing ONCE's outside venue on Sunday. I desperately wanted to attend, especially since I have no idea what will be happening with ONCE after the month runs out, but it didn't work out with my schedule. Of course, after I stumbled on free last minute tickets, I decided to drag my almost thirteen year old daughter out with me for this one. Hey, she's suddenly getting into a lot of what she would consider oldies on her own, so why not, right?

Juliana Hatfield was originally supposed to tour with Soul Asylum and Local H, so Sunday night's show was a one off. Judging by the setlist, this was a night of what Juliana Hatfield wanted to play. Although she released the excellent album Blood back in May, she only played one or two songs off the album. She didn't even have any copies to sell at the show, because she said the audience paid enough for the tickets. (I feel obligated to mention that tickets were only $15.00.) Last year's show included a bunch of covers off her recently released Olivia Newton-John and The Police tribute albums, but she only played three of these songs. Even the hits were sparse. She played "My Sister" as her second song of the night, but left out "Universal Heart-Beat" and "Spin the Bottle." She also didn't play anything off 1998's fantastic Bed. Instead she focused on newer songs, with three coming off 2019's Weird and two off 2017's Pussycat. She did attempt "Live On Forever" off 1995's Only Everything at a fan's request, but bailed after a few lines as it was "too rusty."

Of course, in 2021 at a show in Boston, Juliana Hatfield is going to do no wrong for the fans in attendance. This was a crowd of Juliana Hatfield die hards who know every single song she was playing and are going to relish in the deep cuts. Most of these people have been seeing her play for well over two decades and are going to appreciate the rarely heard newer songs more than the classics. It's not like Hatfield has ever put out a bad album, and her newer releases have been stellar. This wasn't a crowd looking to relive their college days. Judging by how many audience members I recognized from seeing at a few hundred other shows, these are music fans who just want to see good music live. One interesting (and fabulous) cover she pulled out was of The Lemonheads' "Hospital." The Car Button Cloth song is a favorite of mine, and surprising since it's not from It's a Shame About Ray which featured Juliana Hatfield.

One thing I never noticed before is just how talented Hatfield is as a guitarist. She cut loose on some of the most interesting solos I've seen live in ages. She has a very J Mascis feel to her guitar playing, just with fewer flourishes. But, seriously, Hatfield can shred live.

Apologies to opener Charmed & Strange. Besides not wanting to get to the venue too early and burning out my kid, we missed them. Stars Like Ours are a band to watch in Boston. They had an early Superdrag meets The Donnas sound to them, and had a blast on stage. Their joy in playing was infectious and quickly spread throughout the crowd. They also busted out a cover of Soul Asylum's "Somebody to Shove." I don't think I've ever seen a band cover that specific forgotten favorite live, but more bands truly should.

I was worried my daughter got bored by the end of the show, but she repeatedly assured me she wasn't. It was the first time I dragged her out to an all-ages show, and hopefully won't be the last even if it was a school night. She even asked me to send her some Juliana Hatfield songs, so the night was a success!

Email ThisBlogThis!Share to TwitterShare to FacebookShare to Pinterest
Labels: juliana hatfield, Ken Sears, live shows, once ballroom, stars like ours