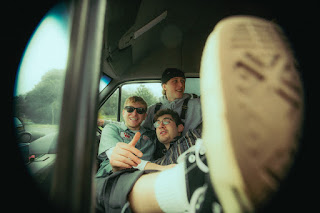 With the runaway popularity of Wet Leg, it makes sense that we'd start hearing more bands from Isle of Wright. If Isle of Wright is going to be the next Seattle, Reminders are a great new addition. Their latest single, "Post Paris Blues," isn't the kind of music that we'd normally associate with England. Instead, it sounds more like southern California's finest skate punk or mall punk, but with a British accent which gives it a new kind of bratty edge. Notice that I didn't call it pop punk. Although there are definitely pop hooks with "Post Paris Blues," I can't call it pop punk with a good conscience. This is a great fun song, and a great debut for a band that could be primed to be next to explode.

"This song came about because I was unhappy with a girlfriend at the time, and I saw an Instagram post from a girl I used to see and her new boyfriend in Paris. I guess at the time I wished I were him, or at least in their position, and the song recounts some of the fond memories I had with her, whilst feeling a little uncomfortable that it was so long ago, and yet here I am, still thinking about it. I felt as though I was missing out on so much, and I’d love to be in their position, reeling with ‘Post Paris Blues.'"

You can watch the video for "Post Paris Blues" below. Best of Beach Punk is due out April 1 on Venn Records in the UK and Wiretap Records in the US. For more on Reminders, check them out on Facebook and Twitter.