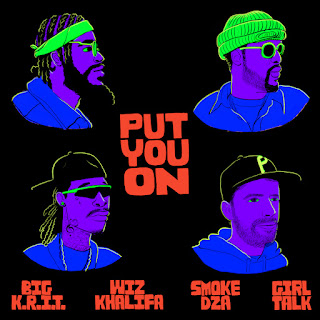 The upcoming collaborative album between Girl Talk, Wiz Khalifa, Big K.R.I.T., and Smoke DZA started 2017 when Gregg Gillis (aka Girl Talk) started working with the other three artists separately. He started having the other artists collaborate on each other's songs and came up with the idea of all four making an album together. They all got together in Los Angeles and Full Court Press is the result of those sessions.

"Put You On" is the first single from the upcoming album. It's a laid back party song that shows off Girl Talk's cut and paste style production (although a bit toned down from his mixtapes) and gives each MC a chance to shine over some 70's soul. If you're familiar with Girl Talk, you're going to love this. If you're just a fan of great hip hop, you're also going to love this.

You can watch the video for "Put You On" below. Full Court Press is due out April 8 on Asylum/Taylor Gang.