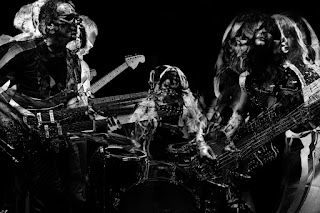 San Francisco's Rip Room make art punk that just straight up rocks. The band's new single, "Complication," is an amalgam of a bunch of your favorite classic punk sounds and bands. There's the post punk of Gang of Four, the buzzing guitars of Dead Kennedys, the bouncy New Wave goes almost pop of Talking Heads and B-52s, and even some of the noise of Sonic Youth. It's this wonderfully odd mesh of sounds that works great together into a song that is as furious as it is pop adjacent. It sounds like punk made for adults who are still angry at the world but don't have the energy to be mad all the time.

“'Complication' is about the failure of society to do meaningful things, and the lack of imagination that's doomed humanity to repeat the same mistakes over and over. Why isn't there equitable treatment of all people? Why is there still war? Why can't the richest country in the history of the world provide healthcare for all of its citizens? So many questions with seemingly the same answer from our so-called leaders: it's complicated."

You can listen to "Complication" below. Alight and Resound is due out May 27 on Spartan Records, and can be pre-ordered here. For more on Rip Room, check out the band's website.