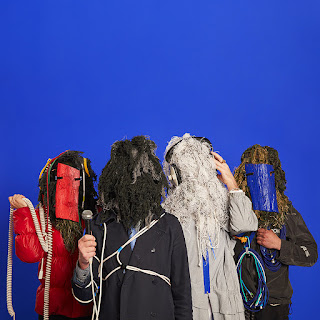 Crystal Ballroom is a fairly new venue that opened up within the Somerville Theater that seems to be more of a performance space than a live music venue. They've hosted concerts, but also burlesque and other performances. Based on what has been booked there, the promoters seem more concerned with art and quality than just getting a Sublime cover band once a month to sell the place out. This was very apparent on Saturday with the triple bill of Snapped Ankles, Gloin, and Muzzins.

We've written about Muzzins before, and they were the main reason I was in attendance for this show. Despite having only two songs out, the band had a pretty die hard fanbase show up for being a brand new band. The three piece led by Rayna Jhaveri were a perfect fit to open this triple bill of oddball bands, with their own sound taking pieces of alt-rock, electronic, funk, hip hop, jazz, and punk into one cohesive sound. Their stage presence belied their relative newness, and they played like a band that has been together for years. It was a fun thirty minute art/dance rock set that included a cover of Blondie's "Rapture" that I hope gets officially recorded. Plus, as great as the recorded version of "Electromagnetic" is, live it is an epic. This is a band you simply need to see if you just need a good time that can still stimulate your mind.

Gloin was the most straightforward rock act of the evening, but the hardest one to describe. They're a four piece noise rock band out of Toronto, but that hardly describes them. For their set on Saturday night, they combined the intense noise and aggression of bands like Sonic Youth, A Place to Bury Strangers, and And You Will Know Us by the Trail of Dead..., but with some metal thrash and funk. They are another band that are completely different live than recorded. On their EP Soft Monster they are restrained compared to their performance. Recorded they focus on the art, live they focus on the rock. It was a breakneck performance that seemed to get out of control from them at times, but they were always able to reign it in at the last minute.

Snapped Ankles came all the way from London. They're an electronic based post punk band that are made up of "forest folk... descended from the trees." Their identities were disguised by leafy and mossy masks (that could have been their real faces, being forest folk and all), their music is certainly not as organic as you would expect from forest folk. With three to four members playing some form of keyboard or electronic noise instrument throughout the set, they can best be described as dance music for people who can't dance. As they ripped through their headlining set, slowly but surely the audience went from chin stroking to full on awkward dance party. The front tree person wandered into the audience regularly, making it a true party of equals and less of a performance. They also may have busted out a cover of Peggy Lee's "Johnny Guitar," but I could be very wrong on that one.

Put all three of these bands on your Must See Live list. You are guaranteed to not be disappointed.