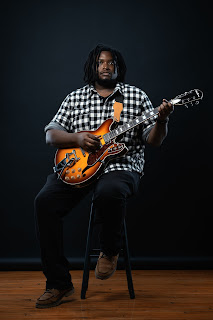 We've been pretty strong supporters of Justin Golden for a few years now, extolling his blend of laid back blues and Americana which is all held together by his nearly magical voice. His latest song goes in a completely new direction. "The Gator" may still be a blues song, but it's a noisy blues garage rocker. It's complete with a chugging beat and some of the most killer feedback soaked blues guitar you've heard in years. After following an artist for a while, it's great to hear them expand on their sound while still sounding like themselves. "The Gator" may be the best we've heard from Golden so far. Expect huge things from him in the future.

Justin Golden explains the story behind his new song:

You can listen to "The Gator" below. Hard Times and a Woman is due out April 15 and is available for pre-order through Bandcamp. For more on Justin Golden, check out the artist's Facebook and Instagram.

Email ThisBlogThis!Share to TwitterShare to FacebookShare to Pinterest
Labels: hard times and a woman, justin golden, Ken Sears, the gator