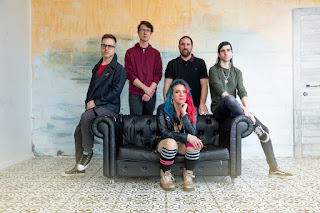 Brooklyn based Typhoid Rosie are making a sort of pop punk with just enough of an edge to still be considered punk, even though it's still very much pop. Their latest single, "Defend Your Temple," is a feminist anthem that sounds like Letters to Cleo auditioning for the Warped Tour. Rosie Rebel has a lot to say about this one in a press release, so I'm going to let her take it from here:

"I would never sit a little girl down in front of a glowing screen to watch Cinderella. It’s not that I don’t believe in a good love story, it’s just the fact that generations of women have grown up with this idea that if we play dress up that some magical prince will come and save us. It’s a sham fairy tale about a girl who cries and waits for other people to come and save her- the mice, a fairy godmother, and finally a prince. She’s afraid that the prince won’t love her because she doesn’t have the right clothes. How is this any different than the plot of Pretty Woman? These are nice tales to get the kids shopping at a young age, but let’s be real and remember that all of this dress up won’t buy you love, but it does suggest that we should be seeking validation outside of ourselves. This is a magic formula that is worth billions: we see just enough airbrushed models every day - to keep us feeling just ugly enough to keep us shopping. Truth be told, there’s not enough diet tricks, ass-cheek squats, breast implants, fake eyelashes, high heels, spanks and wrinkle creams to ever make someone love you. Real love is way deeper than that, it’s not so fleeting, shallow, or superficial. When your looks have faded, love is the thing that will drag its 90 year old balls across the kitchen floor just to kiss your stank breath on your aging face. But we never see this love story, because we’ve been told thousands of times a day by advertising companies that aging is ugly, “anti-aging.” You’ll be surprised the impact these glowing images have had on our self-esteem and images of beauty. Personally, I think it’s so fucking sad, to discover that for an entire girl’s life it is way more profitable for companies to make her feel ugly than it is to build her up into becoming the magical person she was meant to be.

"This is why I wrote this song: 'She don’t need no prince, she don’t need no mice, she’ll make it on her own just fine!' All this work to make us look shiny for others, but what about cultivating your mind, soul, and talents and finding the reason you were put here. Personally, I want to see the girl who looks in the mirror and wonders about that badass bitch inside of her who’s ready to kick some ass. Have you thought about her lately? I fucking hope so - because your ancestors didn’t pass the torch of life to you to watch you sit around and wait for some person who may or may not show up. You weren’t meant to stagger through the streets on trash night at 3 o’clock in the morning with a broken high heel like some kind of a discarded wounded antelope. For god sakes, Cinderella, get yourself a practical shoe! Love will come when you stop trying so hard to find something that’s already inside of you! And until love comes, it’s a perfect time to get your shit together and become grounded in yourself. But by then you’ll already have your Ivy League degree, your P.H.D., will have traveled the World, and have a couple black belts just in case. If you’re not there yet, you need to do things that enrich your soul and unlock that magical thing.

"My Cinderella has mace and knows Krav Maga, so you would never see her not ready to kick ass. Also my Cinderella doesn’t cry waiting to be discovered, she has her own shit to do, she’s an Empress who knows her worth, and that’s why she’ll never be bread-crumbed. Let’s be real, it could be years of waiting for this alleged prince to show up while you’re playing tinder-roulette in a cycle with people who have disposable mentalities - who are so fucking quick to pull your pants off and then ghost you. As a society we’re so quick to scroll to the next thing, and so quick to discard women, but let’s remember the holy life dwelling inside of our bodies. The body is a temple where that badass goddess lives. It’s not like the Holland Tunnel where any loser can drive inside you to dump their turd garbage, nor are you some kind of un-attended Halloween candy bowl of losers grabbing fistfuls of you and leaving nothing in return. Your body, your choice, but remember that some people are so disgusting that all the showers in the World won’t make their ugly soul taint go away, and you don’t want to be stuck with their spiritual shit shmears all over your beautiful soul. Love yourself above all others, and be ready to kick some ass! I just thought, instead of selling little girls princess dresses, we start by building them up on the inside, so that they are strong enough to withstand an ever-increasingly disposable World. Time to build each other up: Share this song with every little and grown girl you know!"

You can listen to "Defend Your Temple" below. Queen of Swords is due out August 13. You can pre-order a copy over at Bandcamp. For more on Typhoid Rosie, check out the band's Facebook and Twitter.