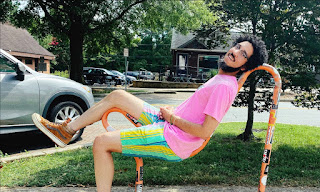 The Cocker Spaniels is the musical project of North Carolina's Sean Padilla, "... a 40 year old black dad who likes Prince and Guided By Voices a lot," and reflects those two artists in his music. I know you're thinking that mixing Prince and Guided By Voices sounds like a horrible idea, but now you've thought about it for a few more seconds and love the idea. And you're right to love it. On his new single, "Racism Priest," Padilla takes the smooth soul side of Prince and mixes it with the frenetic indie rock of Guided By Voices. Yeah... it's fantastic, even with the less than fantastic story behind it.

Sean Padilla explains the story behind the song:

"This song was inspired by a White person with whom I attended middle school, who privately messaged my spouse on Instagram last year to apologize for having called Black people the N-word when she was younger (when she and I were classmates). I had no idea that the slur had ever been in her vocabulary but, then again, that may be why she apologized to my spouse, whom she only knows through the internet, instead of to me. It was an awkward situation that instantly killed our friendship."

You can listen to "Racism Priest" below. The Cocker Spaniels Are Still Alive, and So Are You (which sees Sean Padilla playing almost all the instruments on) is due out August 13. You can pre-order a copy through Bandcamp. For more on The Cocker Spaniels, check out the artist's Facebook.