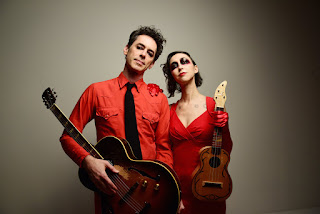 Songs inspired by quarantine and lockdown are going to be a fact of life for the foreseeable future. It was (is?) such a massive part of everyone's lives for over a year, and it's impossible for art to not reflect that. Hopefully the rest of these songs is as good as Charming Disaster's. "Spooky Action" is one of Charming Disaster's cabaret meets folk that we've come to love from the duo. It's far more melancholy than their usual songs, and lacks the sense of humor and joy that permeates their music, but this wasn't exactly a fun time for most people so it's quite understandable. Instead, "Spooky Action" is a beautiful, sad ballad about loneliness and reuniting.

Since it is still a Charming Disaster song, it does have more flair than other quarantine inspired songs. The band explains:

"'Spooky action at a distance' is a quantum physics phenomenon where two particles that are physically separated affect each other as if they are still connected.

"We wrote this song when we were quarantined in two separate locations during the 2020 lockdown, and recorded it together after we were reunited, holed up in our studio like a couple of kids in a treehouse. It includes a secret message in Morse code."

You can listen to "Spooky Action" below. You can get a copy of the single on Bandcamp. For more on Charming Disaster, check out the band's website. Current tour dates are below the song.