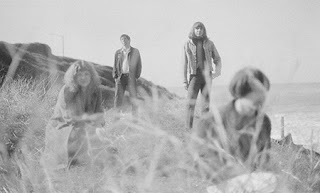 San Francisco's The Umbrellas make pop music, but not the kind of top 40 music that is considered pop these days. They play pop music more like The Byrds or The Mamas and The Papas. That's not to say their latest single, "Pictures," is a 60's throwback. Sure, the song has some elements of the 60's like their harmonies or a killer surf guitar solo. But "Pictures" has far too much jangle in the guitars. If anything, it sounds like The Magnetic Fields decided to be less snarky and soundtrack a love in, but make it dream pop.

In a press release, the band says of the new song:

“'Pictures,' in a vague sense,  explores the soreness one feels teetering in-between infatuation and reality. The majority of the lyrics were written by Nick and Matt composed the music on this one.“

You can watch the video for "Pictures" below. The Umbrellas' self-titled album is due out August 6 on Slumberland Records. You can pre-order/pre-save a copy here. For more on The Umbrellas, check out the band's Bandcamp and Instagram.