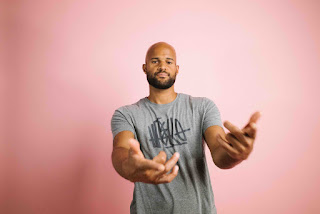 When you first see that Homeboy Sandman has a song called "No Beef," you would assume it's the Urban Dictionary definition of "To fight or Scrap with another person." Instead the song is about Homeboy Sandman being vegan. In fact, it may very well be the best song about being vegan ever recorded. "No Beef" is an off-kilter alt-hip hop jam. Musically it doesn't quite sound like any other hip hop out there despite being purely hip hop (even without the sample from "La Di Da Di"). It's an interesting song that branches hip hop off into a direction it doesn't normally go into.

"I had psoriasis all over my body. It was driving me crazy. I asked the doctor “could it be something I’m eating?” She looked me dead in the eye, straight faced, “food has nothing to do with it.” Thank God for the intuition to disregard her “treatment plan” intended to make me a lifetime customer of the medical industry. Year and a half after removing all meat and dairy from my diet my skin is completely clear. I met a dude who told me he cured his diabetes eating plants. I talked to a guy just the other day who told me he cured his mother’s cancer. It’s all in The China Study you should read that. I’m not saying every body is the same. I’m just saying my doctor straight lied to me. Now that’s true, that’s why I never have no beef."

You can listen to "No Beef" below. Anjelitu is due out August 6 on Mello Music Group. You can pre-order a copy here. For more on Homeboy Sandman, check out the artist's Facebook.