Fokis featuring Drive-By - "The Switch Up" 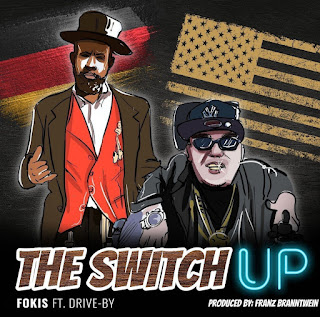 American rapper Fokis has an upcoming project called Seasons Change, People Too: The Experiment. For the project's first single, Fokis brought in German emcee Drive-By. "The Switch Up" sees Fokis rapping German lyrics that Drive-By wrote and Drive-By rapping English lyrics written by Fokis. The song is a total throwback to early 90's hip hop, which is kind of my hip hop glory days. It's the kind of hip hop that isn't the gangsta rap or positive hip hop of the day. It's lying kind of in the middle. But it's going to make you nostalgic for that era, regardless of how much rap you listened to in your youth.

In a press release, Fokis talks about the song:

"I've been touring Germany since 2018 and have connected with the people really well and in the process I also learned a few basic words in German. One day I thought to myself, what if I wrote a verse and had a German rapper say it, and a German rapper wrote a verse for me, to say... so I reached out to my boy Drive-By with the idea and he was all in. It took him 20 minutes to record what I wrote for him and took me 8 hours to record what he wrote for me, but we got it done and had fun doing it."

You can watch the video for "The Switch Up" below. For more on Fokis, check out the artist on Facebook. You can find Drive-By's Facebook here.

Email ThisBlogThis!Share to TwitterShare to FacebookShare to Pinterest
Labels: drive-by, fokis, Ken Sears, seasons change people too: the experiment, the switch up