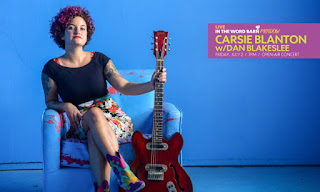 As I begin my foray into seeing live music again, an outdoor show in a field sounds like a perfect way to reintroduce myself. That's pretty much the only thing my anxiety could handle at this point, and, you know... baby steps. Back in the Fall, I saw that The Word Barn was putting on shows in their meadow. I would have gone then, but nothing worked out with my schedule. When they started booking meadow shows this spring, no bands I knew worked out with my schedule, so I started checking out artists I had never heard of. That's how I discovered Carsie Blanton.

This show was originally supposed to be Blanton solo, but she brought along her band which consists of a bass player and a keyboard player. As expected, both the crowd and musicians were especially pumped to be there. This particular show had been rescheduled multiple times, which added to the excitement that it was actually happening. Especially since the rain held out (almost) long enough to not affect this evening. Maybe it was the setting of a meadow with trees circling us, a Friday night starting off a holiday weekend, a fire crackling in the background, etc., but Blanton and band played a much more laid back set than I had expected. Even the firey, politically charged songs were chill. But that's part of Carsie Blanton's charm: She can take angry, political music and make it filled with her gorgeous Americana and jazz infused pop sound.

On a rainy and chilly night (it was in the upper 50s two days after multiple days in the 90s...), Carsie Blanton adjusted her setlist to try to keep the crowd warm. She tried upbeat, angry songs ("Shit List"), dirty songs ("Jacket"), party songs ("Party at the End of the World"), and a tribute to the late John Prine ("Fishin' with You"). It's generic and hacky to say that the rain didn't dampen anyone's spirits, but... the rain didn't dampen anyone's spirits. Between Carsie Blanton's insane amounts of natural charm and everyone's excitement that the show was actually happening, nothing could have ruined the night. Even everyone forgetting the words to the song "Bed" (it was a requested song that has lost a lot of it's zest with a new Administration) just added to the evening.

Also, a note about The Word Barn. It's a venue I've been wanting to go to for years, but it's never quite worked out. It's literally a barn where mostly Americana bands play on the New Hampshire seacoast. Plus, they erected a stage in a field beside the barn to keep putting on music during the pandemic. The entire experience blew away my expectations, even with less than ideal weather. It's truly a magical venue that I can't recommend enough.