The Real Minx - "Search and Destroy" 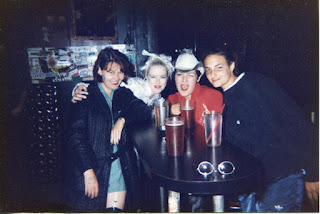 The Real Minx formed way back in 1994 at a Costa Mesa, CA coffee shop where all four members worked. The short lived band only had one recording session which resulted in a self released single and a song on the Alright This Time Just the Girls: Volume 2 compilation. Now, over two decades later Sympathy for the Record Industry is set to release a double gatefold 7" that includes all five of the songs they released from those sessions.

"Search and Destroy" is such a gem for one of my favorite eras of recorded music. An undiscovered mid 90's all female punk band? I'm all in for this already! A review from RIP Magazine described them as "... a cross between The Go-Gos and Bikini Kill." I have no idea how it gets better than that. This is pure raw 90's punk, part riot grrrl and part pop. It's brash, and fun, and such a wonderful slice of nostalgia provided by a band I had never heard of from that time.

You can watch a live performance of "Search and Destroy" below recorded at Peer Records in 1996. (A record store performance! The nostalgia continues...) You can pre-order the 7" double gatefold record here. It is due out August 6.

Email ThisBlogThis!Share to TwitterShare to FacebookShare to Pinterest
Labels: Ken Sears, search and destroy, sympathy for the record industry, the real minx