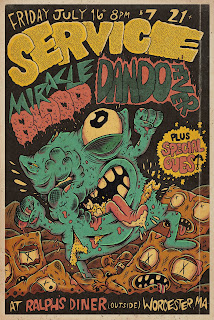 As venues open and shows are ramping up again, I haven't been quite comfortable going inside a venue yet. My COVID anxiety hasn't settled down yet, so for right now I'm sticking with outdoor venues. Luckily, Ralph's, everyone's favorite dive bar/punk and metal club in Worcester, is currently hosting shows outside on their "patio." Patio is in quotations since it's really more of the end of their parking lot that's kinda cordoned off with some tables and chairs. There's a PA, but no lighting system except for streetlights and some string lights. In other words, it's pretty perfect if you know and love Ralph's.

I finally made it down to one of these since Service was playing. They are one of my favorite discoveries from last year, and I couldn't wait to see their ultra-aggressive noise punk in person. For a band that hadn't played a show in who even knows how long at this point, they mastered that tight but loose combination I need in a live show. It may not have been technically perfect, and there were a few sound issues, but it's literally an indie punk show in a parking lot, so that's a requirement. Plus, they played loud to the point that free earplugs were handed out to whoever wanted them for an outside show. It was a little strange seeing a show like this with the majority of the crowd sitting at chairs and tables, but it's how we're all adjusting right now. But a loud, screamed filled rock performance by musicians who are shockingly talented was exactly what I've been missing all this time.

Next up were Miracle Blood, who I didn't know of before this show. Sporting a singer who kept informing the crowd about how much distortion pedal was being used in each song (much more humorous in person than it sounds when I write it), the Boston band played a blistering set. Even the song that was almost a ballad ended up being crushingly loud (and distorted!) by the end. This is a band that made a song about a Pomeranian be one of the loudest songs of the night. To me they sounded like if Jello Biafra jammed with The Melvins without ever sounding like when Jello Biafra actually played with The Melvins. Miracle Live in that area between punk and metal while refusing to commit to either. They're a band we'll be keeping an eye on from now on.

Apologies to both Pillowman and Dando Fever for missing their sets. I had an early morning on Saturday, so I needed to bail early. Plus, my baby steps to live music includes building up to a four band bill. Normally I'd avoid a cover band on purpose, but Dando Fever specialize in the music of The Lmeonheads and Juliana Hatfield, so missing them was a true bummer.