Jeff's Best Albums of 2013: #2: Sallie Ford and the Sound Outside - Untamed Beast 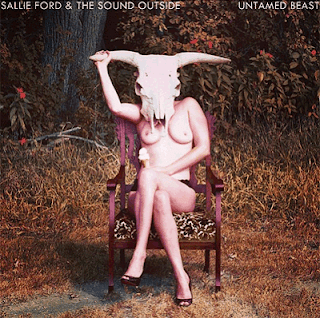 My #2 album of the year is Sallie Ford and the Sound Outside's Untamed Beast. Ken saw them live earlier this fall, and he's pretty much the reason why I'm a fan.

With that said, a confession: the debut album, Dirty Radio? Really uneven for me. "Danger" was off the charts awesome, but it didn't hold up so well for me. Part of it is because the whole jazzy/blues thing is not always my cup of tea, so my expectations for her new album were not terribly high.

The album works really well for me in part because a lot of the blues parts are put in the backseat in favor of a more rockin' point of view. It results in a moodier album with a lot of attitude, and, frankly, a lot of sexuality oozing out of every pore. It means more mid-tempo songs like "She Told Me" have a significant purpose while sexy rockers like "Lip Boy" or "Do Me Right" are equal parts fun and frolicky. It's really well-crafted, and doesn't suffer from any sort of sophomore slump at all. Sadly, we learned this week that this incarnation of Sallie Ford music has broken apart, so, while we'll hear more from Sallie Ford and her apparent all-girl group next year, this is the last we'll hear of the Sound Outside.

You can stream the album below: