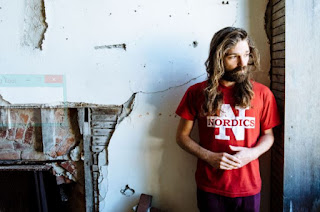 Like us, you might be familiar with the name Twain than his actual music. He's played with such current folk luminaries as The Low Anthem, Spirit Family Reunion, and The Deslondes, and has played the Newport Folk Festival. He has a new album coming out in October, and has shared the first song from that album.

"Solar Pilgrim" masterfully merges mainstream neo-folk and freak folk. At some moments it seems like he could be the next Langhorne Slim, and at others he's the next Devendra Banhart. It's a touch line to straddle, since going too far either way could be a disaster, but Twain does it expertly. It's all raw, beautiful vocals with hauntingly spare instrumentation that is still fully fleshed out. "Solar Pilgrim" is brilliant.

You can listen to "Solar Pilgrim" below. The new album from Twain, Rare Feeling, will be released October 20 on Keeled Scales. For more information on Twain, check him out on Bandcamp and Facebook. Tour dates, including some with Big Thief and Langhorne Slim, are below.