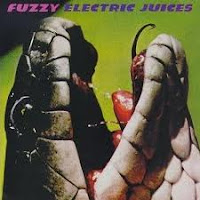 Fuzzy received a lot of unfair comparisons to the Lemonheads back when this album was first released. Both bands were from Boston; David Ryan, the drummer for Electric Juices, was a former Lemonhead; both were on Atlantic Records; and both had ‘60s cover songs as their lead single. But while the Lemonheads’ cover of “Mrs. Robinson” was an enforced decision by the record company and feels ironic at best, “Girl Don’t Tell Me” is a total homage to the Beach Boys original. The similarities are incidental; what should matter is the music.

I hadn’t listened to this album in years, and I’m pleasantly surprised at how well it has aged. Fuzzy is led by two singers, Hilken Mancini and Chris Toppin, who share vocal duties equally. Each has a completely distinct voice and songwriting style that blends perfectly with each other, particularly while singing together. Electric Juices blends ‘60s girl group harmonies with a Beach Boys style California sound, the occasional twang of country, and ‘90s power pop jangly guitars. Fuzzy is a positive, upbeat band, even on songs of heartbreak like “Glad Again.” “Sleeper” is still my favorite after all these years, with the intense, almost obsessive vocals of Hilken and driving guitar. I think I had dismissed the album’s closer, “Christmas,” as being a dull, drippy ballad. I formally apologize for that, as in my 30s I’m finding it a masterful display of the power ballad, and one of my favorite Christmas songs of all time.

You can find Electric Juices on Amazon for as low as $.01 for the CD. It’s guaranteed to be the best penny you’ve spent on music in a long, long time.