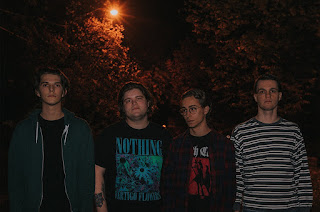 No Sun might be the very first band to come out of Salt Lake City that I've ever heard. Their new song, "Drown In You," is being compared to both grunge and shoegaze, but I'm really not hearing that. What I hear in "Drown In You" is more of a late 90s, post grunge alternative sound. At least, it has those hooks and pop sensibilities that came during that time. But this song is more distorted than most things released during that time period. As in way more distorted. There are some sounds that sound almost like when home demos tapes (or ultra lo-fi albums) used to warp a bit. It's odd because this sounds too well produced to be tape flubs, but it hits this odd little nostalgia button for me that I didn't know even existed. It creates this great mixture of early 90s DIY noise with late 90s power pop.

No Sun's debut album, If Only, is due out on January 20th via The Native Sound. You can listen to "Drown In You" below. If Only is available for pre-order in digital as well as black or pink vinyl formats over at Bandcamp. For more on No Sun, check them out on Facebook.

Email ThisBlogThis!Share to TwitterShare to FacebookShare to Pinterest
Labels: drown in you, if only, Ken Sears, native sound, no sun