Forgotten Fridays is a weekly feature here at If It’s Too Loud.. where we go back and find the lost records of our glory days. We played these on our college radio shows, put them on countless mixtapes, and then forgot they existed. Once a week we go back and remind you, and help decide if they were any good. 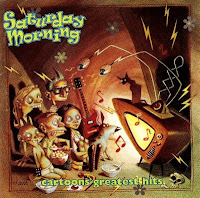 Cashing in on the 70s nostalgia kick of the mid 90s, Saturday Morning Cartoon’s Greatest Hits features 19 cartoon classics as performed by bands of the moment. It’s a pure novelty album that made perfect sense then, but just feels silly now. But that’s not necessarily a bad thing. The quality varies wildly between songs, with perfectly fun, infectious tracks right next to one of the worst things you will ever hear in your life. One of the most fun qualities of the album is hearing acts that are normally considered serious artists letting loose and having fun. Right off the heels of Whipsmart, Liz Phair teams with Material Issue for “The Tra La La Song (One Banana, Two Banana)” from The Banana Splits. Helmet has the most rocking track with the Gigantor theme, while Violent Femmes have the most fun with “Eep Opp Ork Ah-Ah (Means I Love You)” from The Jetsons.

When this album is fun, it’s really, really fun. Juliana Hatfield and Tanya Donelly form a 90s power pop dream team with “Josie and the Pussycats.” Another interesting pairing that delivers is Mary Lou Lord with Semisonic for “Sugar Sugar.” It doesn’t hurt that it was actually a hit song when The Archie’s did it in the 60s. Frente!’s version of “Open Up Your Heart and Let the Sun Shine in” from The Flintstones has all the charms of Pebbles’ original, and is just a pretty song. “Spider-Man” by the Ramones is the best known track on the album for a reason: It’s actually fantastic and fits right alongside other classic Ramones tracks. It’s even featured on some of their greatest hits compilations.

But when this album is bad? Yikes. “Go Speed Racer Go” by Sponge? Collective Soul covering “The  Bugaloos?” Awful. Even promising tracks like Tripping Daisy doing “Friends/Sigmund And The Seamonster” and Matthew Sweet with “Scooby Doo, Where Are You?” are just dull. I remember loving Sublime’s version of “Hong Kong Phooey,” but now it’s as unlistenable as I find the rest of Sublime’s catalog. The absolute worst of the entire bunch is Wax inexplicably covering “Happy, Happy, Joy, Joy” from Ren & Stimpy. This song is an absolute abomination and made me despise “Southern California” for years until I could push it out of my brain.

You can find copies of Saturday Morning Cartoon’s Greatest Hits on Amazon varying in price as much as the songs do in quality, from $3.23 to $59.99.