Walter Sickert & The Army of Broken Toys - Toys of Future Past 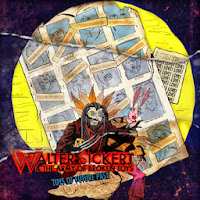 When folk/punk/burlesque/noise/cabaret/steamcrunk act Walter Sickert & The Army of Broken Toys decided to record the fabulous Soft Time Traveler, they took to Kickstarter and asked fans to chip in for various rewards. One of which was picking a song for them to cover. This option was chosen 22 times, which leads us to Toys of Future Past.

The 22 tracks chosen run the gamut from obvious (Tom Waits’ “The Piano Has Been Drinking”) to obvious jokes (Barnes & Barnes’ “FishHeads”). The ones in the middle tend to be the best, including an absolutely inspired version of Tori Amos’ “Happy Worker.” It’s a track from the Toys soundtrack, but the Army of Toys give it a slinky, evil reggae vibe. Neil Young’s “The Loner” trades Young’s trademark guitar work for Rachel Jayson’s viola. They also cover fellow band The Michael J. Epstein Memorial Library’s song “The Saint of Glass Worms,” which was actually inspired by Walter Sickert. This cover might have created a universe destroying worm hole. Pretty much the only song that sticks with the original's formula is Patsy Cline's "Walkin' After Midnight," but why would you mess with perfection?

At 22 songs long, not every one is great. But, 22 songs is a lot of songs, especially when you’re recording the 18 song Soft Time Traveler. I still implore you to give it a listen.

You can stream and purchase Toys of Future Past over at Walter Sickert & The Army of Broken Toys’ Bandcamp page. For more information, head on over to their website. They’re playing a three night stand in for Halloween, but right now the only date I can find is November 2 at Cuisineen Locale in Somerville. Below is a video for them covering "Paint It Black." It's not on the album, but it is bad ass.