The Chambermaids - Whatever Happened Tomorrow 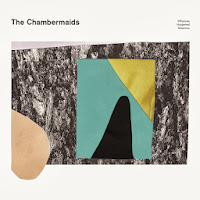 Back in 2003, siblings Neil and Martha Weir formed the Shut-Ins with the help of a drum machine. When they brought in a live drummer they changed their name to The Chambermaids and shortly after that added a second guitarist, bringing their ranks up to four.

In September, they released Whatever Happened Tomorrow, their third full length, on Guilt Ridden Pop. It’s some of the drone-iest shoegaze I have ever heard, but with shockingly pop hooks. It’s not quite as poppy as The Stratford 4 and leans more towards My Bloody Valentine and earlier Catherine Wheel. The record is unbelievably lush yet sparse at the same time. It’s less a wall of sound rushing at you than a swirling, twisting vortex of sound. The whole thing creates a unique and original sound out of familiar pieces. That is, until “China Blue,” the 5th track, comes along and sweeps you away.

Whatever Happened Tomorrow is available now on Guilt Ridden Pop. Head on over to The Chambermaids’ Bandcamp to hear and purchase the album, and for some more info about the band.