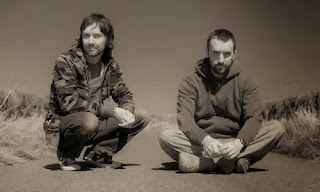 I've mentioned here and there about my mid-to-late 1990s electronica/techno addiction I went through. I enjoyed groups like Orbital quite a bit, but it was ultimately the more difficult/interesting artists like Aphex Twin that stuck with me as I transitioned to more of an indie rock listening trajectory. I always kept some of the electronic love in my back pocket (Of Montreal's electro phase was a solid time for me), but it's only fairly recently that I've come back into the fold a little more significantly.

I was never much into trance or big beat type stuff. I enjoyed a good deal of house music, and today's house-influenced pop is really great, but the dubstep/brostep thing leaves me cold. Meanwhile, a band I knew of but never ever listened to, Boards of Canada, released their first album in eight years this year with Tomorrow's Harvest. I was interested in listening to it, but since I'm more or less an exclusive Spotify listener and basically none of their stuff had made the service, I kind of put it aside and didn't think about it. I then noticed a friend listening to the new album on Spotify, and decided to fire it up.

I've apparently been missing quite a bit. It's not really fair to call it trance, but it has trance elements. It's certainly not traditional electronic, and a lot of it feels more...natural than the often sterile sounding electronic stuff. They also have a lot of brief interludes sampling what sounds like old recordings of television or radio. It creates a really strange atmosphere to go along with the moods of the album. It is excellent "getting stuff done on the computer" music. My productivity has gone through the roof thanks to this band. Maybe not their intention, but I'll take it.

A friend describes them as having a "malfunctioning washing machine" vibe, while my wife insists she's hearing phantom baby cries from every song and every album. Sounds like a winner, right? They're definitely worth a look. My favorite releases so far: