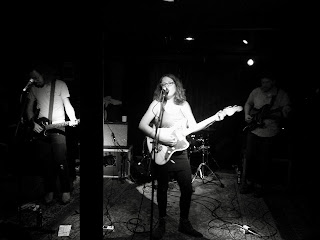 I was beginning to think I was destined to never see Sallie Ford & The Sound Outside. I missed their set at the 2011 Newport Folk Festival, and even though they had played in 3 times this year, none worked out with my life. I was thrilled to see they were playing the Lizard Lounge in . It seemed like an odd venue that would be way too small for them (it allegedly holds 80 people, but it always seems more like 30-40 to me). Sure, it was a Wednesday night, but I obviously had to go.

On their Dirty Radio and Untamed Beast, Sallie Ford & The Sound Outside are an amazing amalgam of white girl soul, rockabilly, and indie rock. Live her voice is absolutely striking, with more than a hint of Eartha Kitt’s sultry purr to it. At the Lizard Lounge, there really is no stage, just an area surrounded by reserved seating tables where the band sets up. The intimate setting feels more like you’re hanging out and watching people you know play, so the few mistakes Sallie Ford made were easily forgiven by the crowd. Her endearing nerdiness also helped. Her between song banter completely lacked the self assuredness it takes to spout lyrics as “I can fuck, I can drink, and I don’t care what you think,” but that’s part of the show’s charm. The live show is also the perfect setting to showcase guitarist Jeffrey Munger. Not that his playing isn’t noticeable on the album, but live he can cut loose a bit more.

Seeing as they have been embraced by both the Newport Folk and NPR crowds, the crowd was one of the most diverse I’ve seen in a long time, especially for a Wednesday night. It was mostly college aged Newport Folk hipsters, but I wasn’t the old guy by a long shot. This show placed Sallie Ford & The Sound Outside firmly into my Must See Every Time They Come Around list. Hopefully life decides to keep out of my way.
Posted by Ken at 12:00 PM