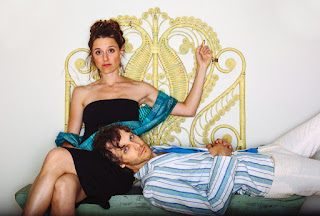 On a personal note, it was the first concert I had attended with my now-wife. Aside from that, it was completely different than the other two previous times I saw David Wax Museum. After seeing them at an outdoor festival for 10,000 people and a large church, seeing them in a barely lit basement club with 105 people was a revelation. They completely altered their presence and sound to fit the space. Instead of playing huge to get the attention of the guy standing in a beer line 100 yards away, they got smaller and more intimate. In an age where a band can go around the country and play the exact same show including stage banter in every venue, it was beautiful to see a band make a show completely different from one I had seem just days before. Plus, the intimacy of the show was truly felt by Suz going around and hugging literally everyone in between sets.

David Wax Museum's new album, Guesthouse, is due out October 16th. You can pre-order it here. Also, be sure to check out their website for their upcoming mega-tour. We can't recommend their show highly enough.


Video by YouTube user supertonic3
Posted by Ken at 12:35 PM