GIVEAWAY: A King in Wait - Take the Throne

Upload your music for free at ReverbNation.com
We cover a decent deal of local Massachusetts music on the blog, mostly from the Boston and Amherst area. One area that doesn't get a lot of looks, however, is Worcester proper. Worcester has had a pretty solid music scene for a number of years, but, especially in the last decade, the hard rock and metal scene has surprisingly held firm in the city, with most important metal acts making it a point to come through The Palladium during their tours, and a lot of local music hitting the scene. 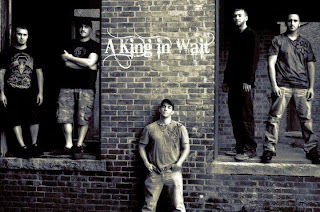 A King in Wait is one of those bands that is coming up in the ranks and getting some attention. Around since 2011, they released their first album last year and, especially as someone who really generally likes the lighter side of music, it's pretty good. Musically they're on point, the melodies are catchier than you'd think ("All for Granted" was floating around in my head all weekend again), and I'm told they put on a pretty decent live show as well.

The band released a new single on their Reverbnation site recently, and they offered up a giveaway to readers of this blog. Take a listen above, and if you're interested in a free CD copy of their debut album, enter the contest by emailing us on the right hand side of the page with "KING" in the subject line and a mailing address in the body to enter. Even if metal isn't your general genre, this is worth taking a flyer on - you might surprise yourself. Entries should be in by April 1.

Meanwhile, you can find more from the band at Reverbnation or on Facebook.
Posted by Jeff Raymond at 7:30 AM

Email ThisBlogThis!Share to TwitterShare to FacebookShare to Pinterest
Labels: a king in wait, giveaway, Jeff Raymond