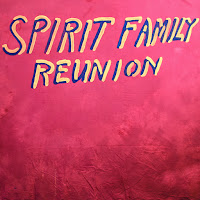 My #3 of the year is Hands Together by Spirit Family Reunion.

Going into this album, my thought was that "this album has no right to be as good as it is." Seeing them open for David Wax Museum back in 2011, the band had a very raw but boisterous quality to them that I warmed to almost immediately, but I couldn't help but think that this was a band that might stick to the sort of lo-fi indie quality that was working so well for them. Instead, they improved markedly as performers, as musicians, and as songwriters, and came up with an album that retains the fun of their initial recordings while absolutely moving forward as an act. Songs like "Put Your Hands Together When You Spin the Wheel" make it impossible for you not to get a bit of a groove on, and "Skillet Good and Greasy" succeeds in making an old standard their own.

It's largely what you want from an Americana act these days, when the genre is reaching a popularity of sorts that demands a mix of tradition and modernity. Spirit Family Reunion is doing something right here, and it would be a mistake to miss it. Listen to the album below: