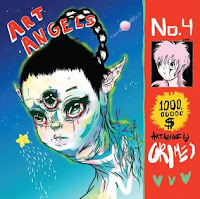 My #8 album is Grimes's Art Angels. If I ever revisit my lists in the future, this might be one I ranked too low. Or maybe too high.

That's the magic of Art Angels. Grimes is the true anti-pop pop star, constantly reworking and reinventing herself along the way, doing it largely on her own, and not being tied down nor allowing the trends to define her sound or aesthetic. When "Go," her Blood Diamonds collaboration, came out last year, I was interested in seeing where this was heading. Then Grimes went, scrapped the whole thing, and went in the direction that resulted in Art Angels. It's kind of a crazed masterpiece, with songs like "Kill V. Maim" sounding mainstream while also being completely ridiculous, "Flesh Without Blood" being a really angry, sassy punch while sounding like it would fit in next to Katy Perry. I have listened to this quite a bit since its release, and I don't even think I've started to figure it out, which should probably say something about what is basically a pop album. I get a lot of flack from people for having fallen in love with so much pop music lately, but it's albums like this that I feel redeem me a bit.

Check it out, it's streaming below: