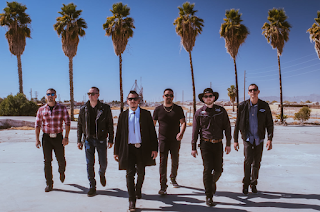 Cumbia fusion band Las Calakas were voted best party band by the Phoenix New Times in 2020. Normally we'd tend to avoid a band a paper voted best party band, but most bands aren't Las Calakas. Their new single, "Morena," is definitely a Latinx song, but this is hardly world music. This is music rooted in Latinx culture that is also infused by hip hop, punk, and metal. This is a ridiculously fun song that is truly great for fans of virtually every genre of music. It combines traditional Latin American music with late twentieth century American styles seemlessly.

“The theme of this song is about a girl who is very dangerous. Like, you know she is dangerous but we as men don't care and we fall for her physical beauty. We know her energy is not good at all but the gorgeousness of her eyes put us in a trance. Matt (the video director) and I stayed at a coffee shop for 5 hours coming up with this story. We are super surprised because everything that we visioned, came out exactly on camera. All the scenes we had in our mind came to life. That's a pretty hard thing to do. But we both are super content with the final product. It was a lot of hard work and shooting In different locations but it's all worth it. We shot 10 hours per day. There is so much love and passion put into this. We love it!”

You can watch the video for "Morena" below. Hechizo is due out in the Spring via My Grito Industries. For more on Las Calakas, check out the band's website.