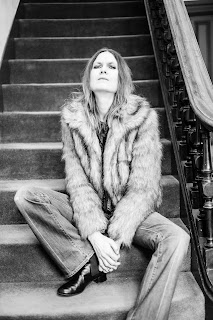 Last year saw the release of Juliana Hatfield Sings The Police, which we didn't cover that much. That's surprising, considering how much I love Juliana Hatfield and covers. We're going to try to rectify that with the recent release of a video for Hatfield's cover of "Can't Stand Losing You." The Rachel Lichtman directed video is basically a re-creation of The Police's video for the same song. It may not be 100% accurate, but it's an insane amount of fun. Plus, using movie magic, Hatfield plays every member of The Police. This is the kind of video that would have been in MTV's Buzz Bin twenty five years ago and would have powered this cover to being a huge hit. Too bad that kind of thing just doesn't exist these days. I've never been a fan of The Police, and Hatfield's cover makes me really enjoy this song, which is rare for me.

You can watch the video for Juliana Hatfield's take on "Can't Stand Losing You" below. Juliana Hatfield Sings The Police is available now on American Laundromat Records. You can get your copy here. For more on Juliana Hatfield, check out her website. Current tour dates are below the video.