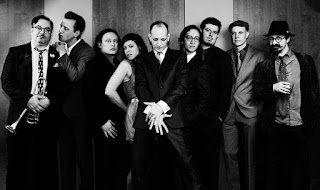 Every now and then we'll come across something that we feel we need to bring you. We're not quite sure if it's good, but there's just something compelling about it. That's the case with The World/Inferno Friendship Society. Their latest single is... interesting to say the least. With a press release stating that their upcoming album "... scores tales of fugitives, arson, larceny, perjury, drug addiction and freedom with elements of soul, funk, latin, polka, and classical music, as well as World /Inferno’s signature punk cabaret sound," the obvious comparison is going to be Gogol Bordello, which isn't entirely inaccurate. But "Having a Double Life Is So Hard (But Obviously Something You Enjoy)" is both darker and more theatrical than other genre blended punk bands. It's more of a mixture of Gogol Bordello, Charming Disaster, and Walter Sickert & The Army of Broken Toys. Also, I can guarantee that the further you get into the song, the more you'll like it. In the few times I've listened to it while writing this, I've grown to like it more each time. And that's always a good sign.

You can listen to "Having a Double Life Is So Hard (But Obviously Something You Enjoy)" multiple times below. All Borders Are Porous to Cats, the upcoming album from The World/Inferno Friendship Society, will be out January 17 on Alternative Tentacles. You can pre-order the album here. For more on The World/Inferno Friendship Society, check out their website. Current tour dates are below the song.

Email ThisBlogThis!Share to TwitterShare to FacebookShare to Pinterest
Labels: all borders are porous to cats, alternative tentacles, having a double life is so hard but obviously something you enjoy, Ken Sears, world inferno/friendship society