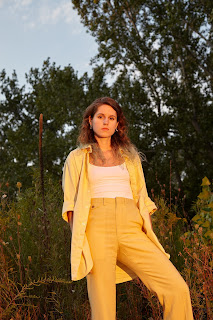 Toronto's Cherry Blaster started off as a bedroom project of Iulia Ciobanu. It was a solo laptop synth project but has morphed into a three piece band. Their latest single, "New Age," definitely keeps that synth heavy bedroom project vibe. It starts off with some sparse keyboard noodling and some beats that sound like a drum machine. The focus is Ciobanu's vocals, which meander around almost as much as the instrumentation does. Eventually the song fills out in sound without losing any of the charm of the beginning.

"Whether the bigger source of this fear was external or internal, as I approached my thirties, I couldn't shake the feeling that my "time was up" as an aspiring musician. One morning in my late twenties I woke up from a dream in which my silver hairs were turning pink and I was struck by the image. I turned this into a song that extended the dream into an alternate reality where I could transform myself into a forever young cyborg. Over the next few years, the song's deeper meaning about self-acceptance through aging coalesced with the original idea to result in an all-pink, soft-sci-fi music video that ended up being shot the day before my 30th birthday."

You can watch the video for "New Age" below. For more information on Cherry Blaster, check out the artist's Facebook and Twitter.