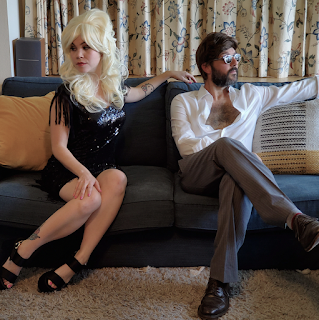 I'm a little embarrassed to bring you all this one, but I just can't resist. But, if you're reading this after the headline you're apparently also onboard. Scott Klopfenstein of Littlest Man Band and Reel Big Fish has teamed with Bite Me Bambi's Tahlena Chikami for a cover of the immortal "Island in the Stream" by Dolly Parton and Kenny Rogers. What's truly shocking/charming about this cover is that this isn't a ska cover of the soft rock classic but a completely faithful version. Is this a great song that is going to change your life? Probably not. But is it a ridiculously fun time? Definitely.

Tahlena Chikami explains how they came to cover "Islands in the Stream":

"You ever just blurt something out of your mouth and not really think it through? That’s how this cover of 'Islands in the Stream' came about. While streaming on Twitch, I just sort of said, 'Wouldn’t it be funny if Scott and I covered Islands in the Stream? We’ll dress up and everything. Hilarious!'. And the internet did what the internet does, it ran with it. Before we knew it, we were there singing it together on Scott’s stream."

You can watch the video for "Islands in the Stream" below, and I can't recommend actually watching it enough. This would have been an MTV Buzz Bin staple twenty five years ago. For more on Scott Klopfenstein, check out his website. For Tahlena Chikami, check out Bite Me Bambi's website.