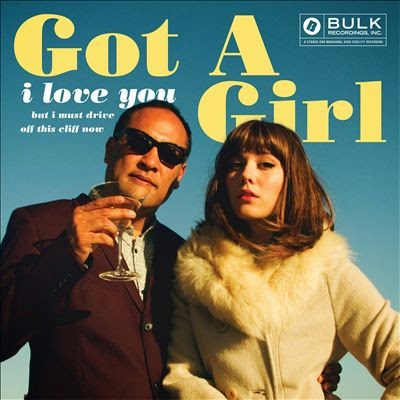 Got a Girl is the collaboration between Dan the Automator (Handsome Boy Modelling School, Deltron 3030) and actress Mary Elizabeth Winstead (Scott Pilgrim vs The World, Smashed). I know, I know. For those of us who remember "Party All the Time," we know to cringe whenever we see an actor try to become a singer. Lately, there have been exceptions, with Zooey Deschanel and Donald Glover become bona fide recording artists.

Luckily, Got a Girl is legitimately good. They duo just released their first video, "Did We Live Too Fast." The song plays with both 60s French torch songs and Dan the Automator's trademark laid back hip hop. It's much closer to Lovage... Music to Make Love to Your Old Lady By than the Automator's more known work. The video features Winstead as a wife dealing with discovering her husband (the Automator) has a fetish for ladies with a third eye. It's definitely worth a watch.

Got a Girl's debut album, I Love You But I Must Drive Off This Cliff Now is due out on July 22. Watch the video below, and follow them on Twitter: @Got_a_Girl.

Email ThisBlogThis!Share to TwitterShare to FacebookShare to Pinterest
Labels: dan the automator, got a girl, Ken Sears, mary elizabeth winstead