Monday Mix: Down With the Sickness 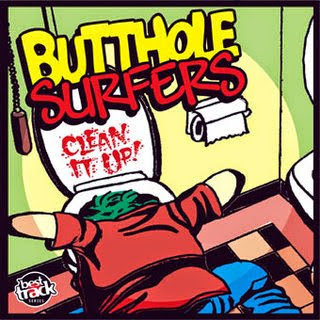 So I spent the majority of this past week sick as a dog. My 11+ year vomitless streak remains intact, but I have been coughing up a storm, had a few low-appetite days, low-energy days, and so on. It inspired me to seek out some songs over the weekend that either centered around being sick, or had illnesses/sickness in the title, or had some sort of relationship to being sick in the song. Some of these are stretches, sure, but I'm sick. Let me be.

I try to keep these clean, but a lot of these songs have some language in them, so be aware.


Kid Koala - "Flu Season": Kid Koala opens this up with a quick song that takes coughs and sneezes to create a beat for this short interlude. Felt appropriate.

Richard Cheese - "Down With the Sickness": There was no way I was going to sully this blog with some mid-1990s nu metal garbage, so I may as well class it up with the Richard Cheese version of the Disturbed "classic." This is kind of Richard Cheese's meal ticket, so you'll find a lot to like if this does it for you.

Fountains of Wayne - "Sick Day": Not one of Fountains of Wayne's best known songs, but it really fits right in with what's expected from them. Not really specifically about a sick day, but I know I should have taken one this past week and didn't.

Lisa Loeb - "Sick, Sick, Sick": Not about being sick, just stealing the song title as an excuse to highlight Lisa Loeb's underappreciated/underrated album from last year.

The Dead Weather - "Cut Like a Buffalo": The chorus of the song involves a choking vocalist. My cough was producing many similar sounds and feelings throughout the last week, to the point where I was singing this song in my head. Sounds like a reason to include it to me.

"Weird Al" Yankovic - "Germs": I'm not sure if this is a straightforward parody of "Closer," but it's definitely "Weird Al" doing Nine Inch Nails. Germs cause disease, so here we are.

eels - "Novocaine for the Soul": Before I sputter out.

Fugazi - "Give Me the Cure": Interestingly, this is not what I'd expect to hear from Fugazi at all. Lyrically, well, put it in place for having the flu instead of the general theme, and...

Young the Giant - "Cough Syrup": I didn't take any cough syrup over the week. Maybe that's part of my problem. When building this playlist, there's apparently a Glee version of it, which will be awesome when we eventually make a "Songs to Make You Sick" playlist.

Beck - "Nausea": If I had to pick the last song that Beck has made that I liked at all, it might be "Nausea" off of The Information. For the title more than the theme, it's a decent track.

OK Go - "Here We Go Again": One of my 15 month old's favorite songs, and a song that's on a toy of his, I picked this because the chorus really describes how I've felt since Wednesday. I'm absolutely cheating here, but until you've woken up on the fourth night in a row thinking you have it fixed and figured out, well...

The White Stripes - "Girl, You Have No Faith in Medicine": And neither do I.

Andrew WK - "Party Til You Puke": Do I really need to explain this one?

Metric - "Sick Muse": One more sort of cheaty one, but any excuse to use Metric. And hey, if Muses can get sick too, it puts me in good company.

Mudhoney - "Touch Me I'm Sick": The classic Mudhoney song, I totally felt like I was rotting from the inside this week. Absolutely.

Sparks - "Achoo": My friend and non-musical collaborator on projects TBD exposed me to Sparks some time ago, and I don't listen to them nearly as much as I should. "Achoo" is a fun song, and the chorus does what it says on the tin.

The Divine Comedy - "The Pop Singer's Fear of the Pollen Count": Before this went full-blown, I assumed that I was just having another spring/summer allergy problem. Now that I have things mostly under control, my nose and throat are hating me due to the high pollen count. I'm almost positive you forgot this band and song, so here's a nice reminder.

Fujiya & Miyagi - "Collarbone": On Thursday, I woke myself up coughing so hard I thought I cracked a rib. On Saturday, I must have pulled 3 different abdominal muscles. This is the best I could do for those sensations.

Butthole Surfers - "Clean It Up": I'll be honest - I have no expectation of anyone listening to this mix to get through more than two minutes of this song, but it makes for a really glorious closer for a group of songs about sickness and illness.

Have a good week, and stay in good health!
Posted by Jeff Raymond at 7:30 AM