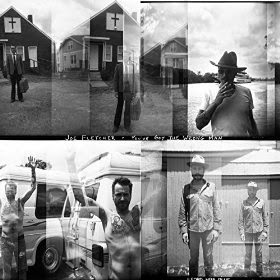 You've Got the Wrong Man might be the best album you'll hear all year. While I've always appreciated Joe Fletcher as an artist, I've never quite been a fan. This album changes it all, and has make me the most gushing, obsessive fan possible.

The album was self-recorded on a 4 track, first at his home in Warren, RI, then a farmhouse in Georgia, and finally at Fletcher's new home in East Nashville, TN. The majority of the album features only his voice and guitar. The effect is something that sounds so gritty, raw, and lo-fi in the best possible way. It feels more like you're hearing him play in the corner of some smokey not quite up to code dive bar for maybe 7 people who are just there to drink.

It's an album of murder ballads, shanties, and songs of love lost that's closer to Johnny Cash and Hank Williams than anything else in decades. The most recent album that has this feel is Nebraska. Yes, that is absurdly high praise, but it's far past well deserved.

"I Never (Reprise)" is from the perspective of a mutinous sailor who doesn't want to return home. It's one of the few songs with additional vocals, from a group that includes John McCauley of Deer Tick. "Florence, Alabama" tells the tale of a romance that can never happen as a soldier has to return to the front. "The Wilsons" is one of the most haunting folk murder ballads you'll ever hear and could be the plot of a Cormac McCarthy novel. The album's closer, "Mabel Grey," is a Brown Bird cover, and a tribute to the late Dave Lamb.

You've Got the Wrong Man is due out on October 7. You can check out his website and pre-order the album here. Watch a performance of "Florence, Alabama" below, and after the break you can find current tour dates.