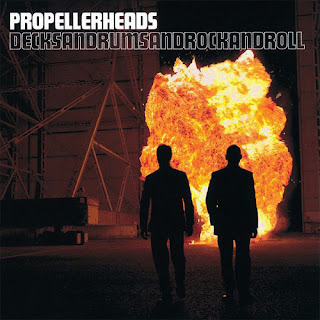 I should preface this by saying that there are a handful of albums that kind of define my love for music, and this is one of them.

It's probably not entirely correct to call this album "forgotten," per se, since there are certain songs like "Bang On" that soundtracked movies for close to a decade after this album was released. But when it came out in 1998, it was the height of the whole "electronica" thing in the United States, and while acts like The Prodigy and The Chemical Brothers were hitting it big, purer electronic acts like Orbital weren't getting quite a foothold and the sort of DJ/producer culture wasn't quite resonating the same way.

Then came this album. I'm sure it was "History Repeating" that got my attention, since I've always loved Bond themes and Shirley Bassey is a legend and this song is incredible in its own right. But what sets Decksanddrumsandrockandroll apart is just the whole package effortlessly jumps from breaks and big beat to big band to even a symphonic-electronic hybrid of "On Her Majesty's Secret Service" toward the end.

A 20th anniversary version came out earlier this year and I only tripped up on it this week. It largely holds up, and I didn't realize how my knowledge of acts like De La Soul and The Jungle Brothers are rooted in their guest appearances on this album. The duo never did another album again - one of the two battled an illness shortly after the album came out and I guess they both kind of went their separate ways - but this is one of those acts that I really wish had done more together. It's such an iconic album for me, and you probably know more of it than you realize. If you're rediscovering it today, congratulations. If this is the first time you're hearing it, welcome aboard.