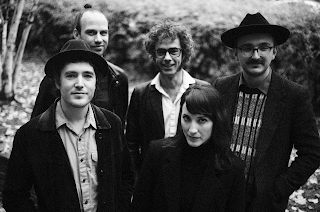 I'll let Little Misty explain the story behind the first single from their upcoming debut album:

"When we started writing the music for our self-titled debut album, out on February 14th, our vocalist, Kathryn, had recently become a mother.

The album’s first single, 'Keeper,' was written after a sleepless night, when her newborn was ill and she was in a particularly vulnerable state.

It got her to reflect on the complex and intertwined feelings of attachment, solitude, love and angst that came with her new role."

"Keeper" truly reflects that feeling of being a new sleep-deprived parent. It's quiet and filled with love, but also insanely vulnerable. It's not quite folk, but there are some folk elements here. In fact, the song brings in a lot of different musical elements. The folky side is enveloped in the sheen of soul, but with some indie rock flourishes here and there. It comes across as a more soulful Wilco and like a lost song of theirs that bridges the gap between Summerteeth and Yankee Hotel Foxtrot.

You can listen to "Keeper" below. For more on Little Misty, check out their website.